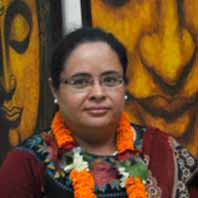 Sandhya Regmi is an Engineer, artist, a writer and social activist. She possesses post-graduate degrees in Environmental Engineering from National University of Singapore, and in Electrical Power Engineering from Dresden University of Technology, Germany. Since her graduation in Engineering in 1995, she has had extensive experiences working inside and outside Nepal. She has over 15 years of experiences in the construction and infrastructure development sectors as Project Engineer, Programme Manager and Environmental Specialist. She served as Project Engineer in the Saigon East West Highway Project in Ho Chi Minh City Vietnam, Foreign Research Fellow at the University of Tokyo Japan, Program Manager at United Mission to Nepal, District Energy Advisor at UNDP, and Engineer at Nepal Electricity Authority. Besides, she played major role in coordinating and organizing the special sports event “Earthquake Refreshment Wheelchair Basketball Tournament 2015”, and helping thereby to uplift the spirit of Nepal’s disabled community devastated by the April-May 2015 great earthquakes. She played key role in providing cheering up of Nepal’s SOS children by organizing Art &amp; Creativity Events in the aftermath of the great disaster, and played leading role in coordinating blood donation programmes and providing relief to artists and victims of Nepal’ earthquake disaster. She has participated in international conferences related to Migration, Environment &amp; Climate Change, Buddhism &amp; Literature. She works as coordinator, speaker, critique, analyst in numerous professional events organized by societies related to Buddhism, literature, arts, environment, and women issues. She has written a series of analysis and opinion based reports and articles related to Buddhism, social &amp; environmental issues which have been published in The Kathmandu Post, My Republica, The Himalayan Times, The Rising Nepal and various other magazines. She has also worked as Editor-In-Chief in several professional journals. She has authored, edited and published books and travelogues. She is a die-hard artist and art lover who has organized a series of solo painting exhibitions of her own at Nepal Art Council, Babarmahal and the galleries of Vietnam on ‘Budhha Portraits’, ‘Himalayas &amp; Mountains of Nepal’, Spiritual Paintings, Landscapes, Abstracts and Semi-abstracts. The events were inaugurated by the Prime Minister, Chancellors, International Monks and Prominent Literary Writers and Artists. She has participated several times in the National Art Exhibition organized by the Nepal Academy of Fine Art (NAFA). She has won numerous awards, honours, appreciations and scholarships, including the DAAD scholarship to study in Germany; Bhadra Kumari Ghale Fine Art Award; Best Panelist Award in International Conference in Japan; and Gold Medal Award (“Ratna Bidhya Padak”) for standing Board 3rd and 1st among girls in the SLC exams of 1984 in Nepal. Besides Nepali and English, she is fluent in both written and spoken German, and has worked as Interpreter and Translator both in Germany and Nepal. She has travelled to India, Bangladesh, Singapore, Malaysia, United Arab Emirates, Thailand, Japan, Vietnam, Cambodia, Philippines, Hong Kong, China, Russia, Germany, Czechoslovakia, Poland, Greece, Netherland, Belgium, Luxemburg, Austria, Switzerland, France, Italy and Spain She is a Life Member of Nepal Engineer’s Association (NEA), Nepal-German Academic Association (NEGAAS), Women in Science &amp; Technology (WIST), Association of Nepalese Women Writers (GUNJAN), Artist’s Society of Nepal (ASON), and Women Artist’s Group of Nepal (WAGON); Member of Nepal Environment Society (NES), Goethe Society Nepal, Founder member of German Alumni Association of Nepal (GAAN), and advisor to Nepal Spinal Cord Injury Sport Association (NSCISA).

Follow the instructions that will be shown on your screen, and essay writer will revise the document according to your remarks When you are surfing the web thinking, “Who can write my essay for me cheap?” you are probably looking for a reputable company with lots of customer reviews When working with our essay writing service, you are guaranteed to get: Unique texts. Anti-plagiarism check But we’re here to change that! Our college essay help service offers a perfect price-to-quality ratio Welcome to the best essay writing service! Our research paper writers are 100% subject experts. Hire a term paper writer to do your assignment from scratch. The third stage is a personal interview. A good essay writers is a qualified professional with the necessary hard and soft skills intacsaludocupacional.com